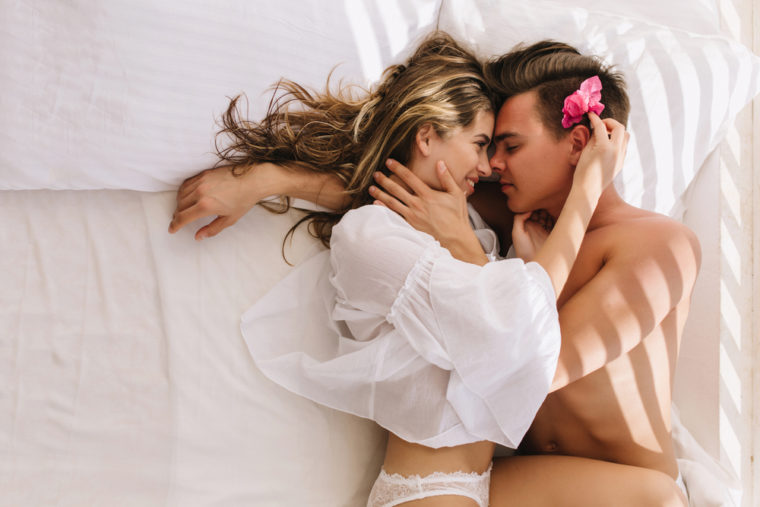 Scorpio Man Cancer Woman in Bed: A Good Fit or Not?

What would Scorpion man and Cancer woman in bed be like? Are they a hot match or do they leave something to be desired? What is their score when it comes to sensuality and intimacy?

Keep reading to find out if this match is something that would be good or even worth it:

Both Scorpio man and Cancer woman are emotionally-driven people. This means that they feel things very deeply thus making them quite passionate when it comes to partnership or intimacy.

The Scorpio man and Cancer woman are actually a great match both in and out of the bedroom because they have a good level of understanding. Both want to feel more than just physical pleasure when it comes to sex.

They both want to connect on a deeper spiritual level and combining their souls for a connection that most will not understand. They can do this while in a relationship or out of it.

Both are capable of having flings or “friends with benefits” because they both care about the partners they may have to be intimate with. Cancer woman may find it a little more difficult when she’s ready to settle down and have a family.

She will more likely want to seek out a partner who is on the same page and wants to dive deeper into a love that will last a lifetime. In the meantime, she doesn’t mind having a bit of fun.

The connection that the Scorpio man and Cancer woman have may actually lead them to dive into an actual relationship rather than a surface connection. They will find that if they do jump into bed, they’ll get closer than they originally felt.

Their emotional nature bonds them and so they may very well decide that there is more than just sex involved between them. It’s a lovely connection that these two have and should they choose, they could have a deeply fulfilling love.

As I mentioned, both Scorpio man and Cancer woman are capable of having casual flings or sexual encounters when they’re not ready to settle down with someone special.

They’ll have fun and not feel bad about it. When these two get together, the passion that is there is something that they’ll both deeply enjoy. Scorpio man is quite kinky and Cancer woman is a pleaser.

These two really have the capability of having some rather steamy sexual adventures should they happen across each other. Experimentation is something that may evolve over time if these two keep the affair going for a while.

If these two take the route of being “friends with benefits”, they will absolutely have no trouble being sexually exclusive as they’re fantastic at pleasing one another.

This is one of the rare matches that can go from being “friends with benefits” to actually being in love and quite serious. Many signs are not capable of doing such a thing and Scorpio man typically won’t with most other women’s signs.

Cancer woman likes to play until she finds someone to settle in with. While she’ll enjoy sexy playtime with the Scorpio guy, she may consider down the line for things to be more than what they are.

Again, these two could actually go from being very sexual with each other to becoming an actual couple if both of them are ready. Otherwise, they’re going to have a whole lot of fun with each other.

No one understands their sexual connection better than they do. Other signs cannot relate as well and won’t find the heated bond these two can potentially have with each other.

Diving into a heated sexual hookup can lead to something much deeper and meaningful relationship if they are both ready to tackle an actual relationship, though if they do not, it won’t be the end of the world.

They’ll stick with their sexual connection until they either want to be more or they’ll move on and form relationships with other people. These two are notorious for having affairs when they are married or in relationships.

These two are just cosmically drawn to each other and are like magnets. They had better watch out and pay close attention to their needs versus their desires or they will end up in a sticky situation that may hurt others.

The need for sexual fulfillment these two have is very strong and is why they are so easy to jump into bed with someone who turns them on. The Scorpio man and Cancer woman bedroom tryst is a tongue-twisting experience.

On a scale of 1 to 10 in the bedroom department, I give this match a 9. They really are hot to trot and will never feel unfulfilled when they have sex. They can have a relationship together or not but the sex will be off the charts.

These two have the possibility of having a relationship that will be quite amazing if they want to. They can also just play with each other and enjoy that until they find someone else they want to settle down with.

Cancer woman will someday want to settle down and have a family. Scorpio man really can go either way. That being said, the Scorpio man would stick it out with the Cancer woman sexually until she breaks free to find love, if not with him.

The Scorpio man and Cancer woman sex is something that most people fantasize about. That’s how hot it is!

Click here to learn more about the Scorpio man and how to understand him sexually!!