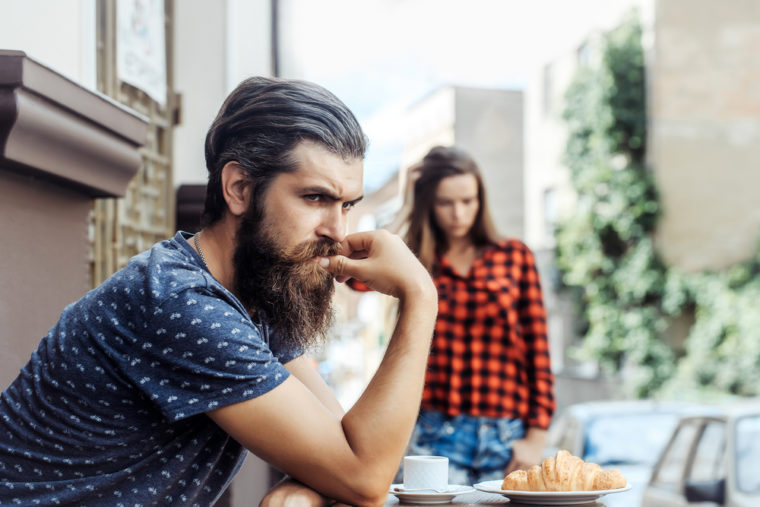 Would you like to know why a Scorpio man ignores you when he’s upset or angry with you? Did you get into an argument and he decides to ghost you or go cold? Why would a Scorpio man ignore you at all? Keep reading for reasons he may be chilly toward you:

1. He’s Really Angry And Needs To Calm Down

This can happen with any sign but it’s possible that your hot-headed Scorpio man is really angry with you for something that was said in the argument or whatever it was that led to the argument.

If he is really angry then clearly the Scorpio man ignores you because he has to calm down first and foremost. He knows that if he doesn’t that he might say something he doesn’t mean or he may be a little too honest.

Whatever the case may be, if he’s angry, it’s best to give him some time and space to think about things and try to get his head together. He has to decide if he wants to work through it or if he thinks it’s a deal breaker.

Scorpio men are short-fused and can become enraged by certain things. If it involved jealousy, betrayal, or something personal to his heart then he will need time to recover and gather his thoughts.

It may be hard for you to not hear from him for a bit but then again, it’s probably better than suffering his wrath by poking a bear with a stick. Remember that Scorpio has a stinger and they’re not afraid to use it.

It’s better for you to back away, give him some breathing room, and let him think things over no matter how much it may feel like torture to you. He may go totally silent while he does this.

This would mean he won’t talk to you, he won’t text, he won’t respond to your texts or emails and possibly won’t answer your calls either. This is all very normal and as long as you back off, you may find greater success.

If the two of you said really hurtful things then he may actually feel as though he’s a bit scared and needs time to think about if this relationship is what he wants and if the fight was even worth it.

It doesn’t matter if he started it or if you did. He will feel as though you wounded him and that person feeling makes him wonder about the relationship as a whole and if he wants to keep it going.

Sadly, Scorpio men sometimes want to run when they’re confronted or hurt so him going silent with you is something that is par for the course. He has to really weigh the pros and cons of being with you.

Keep in mind that even if it wasn’t your fault, he still perceives it the way he perceives it. He will want time to himself to sort things out in his head, mull it over, and hash it out with his own emotions.

Scorpio doesn’t react well to high powered emotional situations. A Scorpio man ignores you fully when he’s truly hurt. He will think you are attacking him no matter what you say. Even if you have the best of intention, he will see it as an ambush.

You perhaps didn’t even start an argument but simply suggested to him how he could improve on something and he takes it as an insult, therefore, he jabs you back saying something really unpleasant.

The Scorpio is a scrapper and so he will fight for himself and what he feels is right even if there wasn’t any malice intent. He’s a reactor and he will react first before thinking it over.

Many times after he takes some time to think, he will actually come back around, apologize if he messed up or will want to talk to you about what happened. If he really loves you, he won’t end it that quickly.

3. He Has A Hard Time Processing His Emotions

I mentioned before that he’s a hot head and tends to react before he thinks. When there is an argument involved, he will be really ticked off or hurt without truly understanding what happened.

Once he actually sits and thinks about everything that was said, he may have more questions for you but it’s best you give him a little time first. When he reaches out to you, he’ll be ready to talk.

Do not push him whatever you do! If you try to get him to talk before he is ready, he re-ignites and the brawling may begin all over again which could lead to a breakup on his part.

Be very careful how you handle the intense Scorpio man. Let him cool down and think it all over. If he wants to stay with you and work it out, you’ll hear from him with questions or perhaps apologies depending on the argument.

Scorpio men’s feelings run very high.  It doesn’t make him a bad guy but it does make him hard to deal with sometimes. It’s important to respect his feelings and who he is.

If you can stay calm and tell him that things need to come down a notch when he’s visibly getting upset, it will remind him that speaking out of emotion isn’t the best way.

When he feels he can talk to you without things getting escalated, he will surely communicate more often and without getting upset. He requires respect and stability.

This is another reason why he works so well with Earth signs or fellow Water signs. He’s a special breed that needs a certain type of woman to handle him without causing further emotional damage.

Just remember, if you had an argument with your Scorpio guy and he’s gone quiet, it’s necessary for him to put all the pieces together in his mind, cool down, and figure out what he wants to do next. Hang in there!

If you want to more about this magnificent man and his quirks, click here to uncover more valuable information!!

Do you know why a Scorpio man ignores you after an argument?