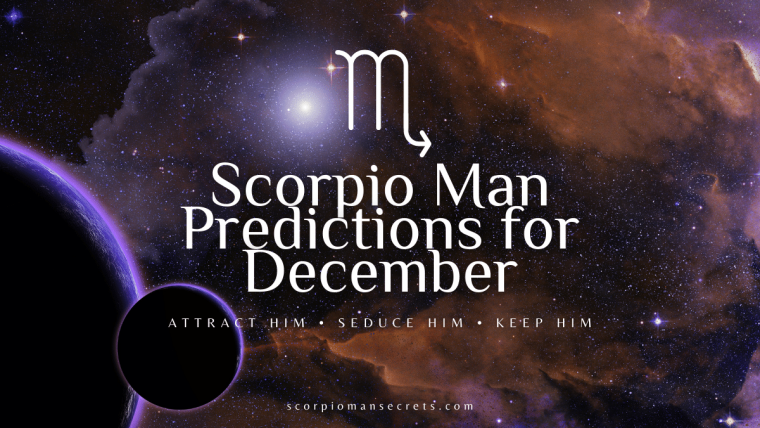 Hello, dear readers, how has your month been? I hope all has gone per your plan, and that you’re beginning the holiday season somewhere warm and cozy.

It’s time to grab a blanket and dive into the last Horoscope of the year for your Scorpio guy! I hope you’re ready because it’s going to be an interesting one…

During the first week of the month, the Scorpio man’s focus will be split between his finances and his health. There’s a wound from the past that might make it difficult for him to come to terms with human fragility (and mortality), as well as conflict between the material and the esoteric. His mood is not in the best shape during this period.

The second week holds a very significant Full Moon in Gemini conjunct Mars Retrograde in his eighth house. The Scorpio man will either have a libido that shoots through the roof, or he’ll be forced to experience a lesson that has to do with his and his partner’s money.

The third week makes for a pleasant and creative shift in his mood, and there will be plenty of opportunities for cozy dates and a dreamy atmosphere. Go with the flow and follow his intuitive lead when it comes to romance during this week. You’ve got this!

On the 23rd, there’s a Super New Moon in Capricorn, and the Scorpio man should sow the seeds of whatever he wishes to become fruitful and bountiful. The Horn of Plenty has come knocking on his door, and he will do well to receive it. It’s a good time for romance and a great time for buying a new vehicle (or investing in one).

Chiron Is A Painful Teacher…

During the first week of December, the Scorpio man’s focus will be on his finances and his health. He will be tested to make a diplomatic balance between his own finances and that of his partner, as well as to pay more attention to the material and mundane world as opposed to that of the occult and etheric.

There might be an awakening of the old wound, something to do either with his knees or legs or with an old leg injury that has left him worse than he was before it; something he wasn’t able to let go of still.

This might put him in a foul mood, and so, although Jupiter is activating his fifth house of pleasure and romance, it might not be such a good idea to pester him more than usual. If he’s up for some steamy dates and romance then that’s great, but if not, leave him be. The Scorpio man prefers to lick his wounds in solace…

This can be a good time to make secret plans for future dates and romantic picnics that you can pull out from up your sleeve like a poker ace when the time is right. Make sure that you’re not ghosting him too much during this week, but also that you leave him be if he desires it.

Full Moon In Gemini Brings In The Bank

The second week of December only fortifies the themes from the first week – a Full Moon in Gemini conjunct Mars Retrograde (his co-ruler) in his eighth house, versus the Sun (and Venus and Mercury) in Sagittarius in his second house, makes it pretty hard for him to ignore the lessons tied to money and relationships that he’s ought to learn.

This can be a real wake-up call, especially if he’s been ignoring the red flags when it comes to spending his partner’s money, or he’s been letting his partner spend more of his hard-earned money than should be allowed.

This is a week of culmination for the Scorpio man and his love life that is closely entangled with his finances. Let’s keep assuming that Capricorn is a money-hungry sign that will do anything for that green; it’s not, Scorpio and Cancer are one of the top leaders that make trouble in relationships when it comes to money (and an unequal sharing of it).

Use this week to examine his ideas and reactions towards money and all to do with it in a romantic relationship, and then based on his attitude and reaction, assume your stance. It’s a tricky question and a touchy situation. Maybe this turns out better than we hoped for, for perhaps this Full Moon works its magic in his libido department, and all his thoughts lead to the bedroom, you never know…

Romance Is In The Air

The third week creates a pleasant vacuum with the tight aspects, and the Scorpio man is left with room for breathing. The Moon will illuminate his social life area, as well as his intuition and dreams.

His third house of communication and commute is being pleasantly illuminated with Mercury and Venus, which makes for a good time to be going places with him and for direct and honest talks that can cover basically any topic under the Sun.

This is a great time to let him know exactly how you feel and to have your feelings returned. If he comes up with some creative or dreamy date ideas, let him take the lead and you just follow. You won’t be disappointed; he’s being intuitively guided and divinely inspired on how to show and execute his emotions.

A Super New Moon In Capricorn That Promises Romance…

The final week offers a new beginning in the form of a Super New Moon in Capricorn that takes place in his third house of thought and communication. This is a great time to invest in a new vehicle or travel never-before-taken roads.

This week can be extremely romantic, you just need to go along with his “basic” plans that might seem too pragmatic or simple, but in the end, they’ll turn out to be the best thing to say “yes” to, trust me.

This is a perfect time for romantic dates that include long walks in the park, museum tours, or taking an open-roof bus tour around the town and seeing your city with new eyes, from the perspective of a tourist.

Whatever you do during this week has the potential to turn into something long-lasting and serious, so count your blessings and take manifestation very seriously – what you focus on during this week can change the course of your (romantic) future. Be positive and enthusiastic. Polish your optimism.

And there you have it, my darlings, the Scorpio man’s fate for the last month of 2022. His mood will be much better from the third week onward, but before that, you’ll have to deal with his moodiness and emotional turbulence.

After the third week, the Scorpio man’s attitude will improve a lot, and he’ll be quite cheerful – something you might not be used to. This is a good time to experience his merry side and follow his lead when it comes to romance and planning dates.

I sometimes hear from readers that while these Horoscopes are helpful for their romantic lives, they crave more detail and more specificity for them. This is totally understandable, and I have figured out a way to make sure you get all the information that you need to take advantage of transits and to know what pitfalls to avoid.

I’ve created a spot here where you and I can talk personally about your own concerns and how to best create the relationship that you have been waiting for. I love talking to my readers and getting to know them as people – and truly, what have you got to lose? Connect with me here.

Wishing you love and light on your journey.