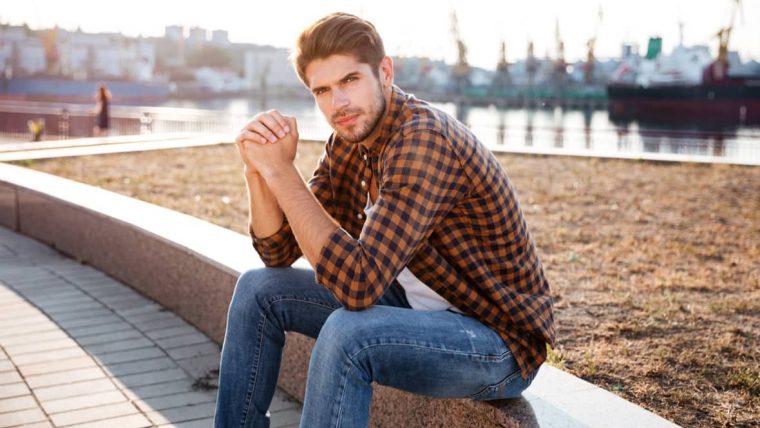 Hi darling, how are you? Not too much doom and gloom, just enough gray clouds and storms, I hope… Let’s dive into this interesting month and see what awaits the dark and sultry Scorpio man.

The beginning of the month sees the Scorpio man undergoing a lot of changes on a daily level and with his job. His home life is not left undisturbed either, as Saturn and Mars are making a conundrum there. It’s a good time to practice physical activity together; ease some of the tension with some intimate time together.

The end of the first quarter puts him in a challenging mood, thanks to the activation of his third-ninth house axis. But in other news, his fifth house of love and pleasure receives a pleasant reinforcement in the form of Venus. So, he will be extra touchy-feely, and he will need all the attention he can get from his lover or love interest.

The Full Moon brings a lot of topics to the surface, but his fifth and seventh houses are accentuated strongly. This means that he will have a chance to make a strong change for the better, but it won’t be easy. Patience, objectivity, and cool-headedness are top choices for this lunation.

The second New Moon (Black Moon) can bring a lot of unhappy lessons and challenges at this time, but if he doesn’t fold and give up, then he just might make it to see happier days. It’s the time of new beginnings for his long-term love life. He should be aware of that.

Right off the bat, there’s a lot going on in the Scorpio man’s fourth and sixth houses. In the fourth house of home and family, there’s a karmic stellium between Mars, Saturn, Juno, and Vesta. While in the sixth house of health and routine, there’s a New Moon conjunct, not just the Sun, but also Mercury and Chiron and Pallas… fun, fun, fun!

This means that he will be preoccupied with matters that concern his family, home, and career. There are probably going to be active changes when it comes to his job and daily routine, and it’s possible that he will start hitting the gym or a new (athletic) hobby during this time. This also means that his libido will hit some very high notes and his need for intense passion will be awakened.

In his fifth house of love and pleasure, Jupiter creeps closer to Neptune, and this means a lot of fun and sexy times, especially if his love interest or lover is Pisces, has a stellium in Pisces, or a Big Three in Pisces. There’s going to be a lot of love from his side during April and deep into May.

Down in his opposite house (the seventh house of relationships), we have Fortune, Uranus, and the North Node. This means that lessons tied to his long-lasting relationships and love are still ongoing, and luckily nothing is provoking the South Node which is in his first house of self, as of now, but his seventh house is telling us that he is undergoing subtle lessons about it.

The Moon Makes Or Breaks The Best Of Us

Around the end of the first quarter, the Moon illuminates the Scorpio man’s ninth house of adventure and higher learning, while making opposition with Pluto in his third house of communication and community. This casts a shadow of conflict on his traveling plans and his inner feeling towards daily commute and neighborhood.

He might feel the need to make some sort of an escape from his immediate surroundings, but the inability to do so can put him in a sour or irritable mood.

Venus moves to Pisces and into his fifth house of pleasure, so he’s going to have a lot of fun when it comes to dating. It’s a great time to go out on dates, daydream together, go to a karaoke bar, or simply take long walks near the water.

Now is the time to dream, fantasize, and enjoy PDA and each other’s company above all else. Plus, dates and romance can put him in a better mood, and he can be great company if he feels like he’s getting the love and attention he deserves. And just to clarify, that means A LOT of attention and affection!

There are possible sudden but fated changes when it comes to his career. He needs to keep a calm and calculated head on his shoulders during this transit, but also, he should make the best out of every situation that arises right now. There’s an opportunity for growth beneath all that sudden “movement.”

The Moon And Its Thousand Stories

The Full Moon makes a pass through the Scorpio man’s twelfth house of dreams, fears, and hidden enemies, and he might discover one amidst his love interests. His co-ruler Mars waded its way into his fifth house and Pisces, and there it feels emasculated and weak.

Venus is already there, and it is the dispositor of this Full Moon conjunct Vertex in his twelfth house, and this means that through romance and fun he discovers who truly means him well and who is just faking smiles and sticking daggers in his back.

What’s interesting is the conjunction between Mercury and Uranus in his seventh house of relationships. This transit will bring forth some news for him, and that news can either be legal or love-related. Or it can be both (like divorce papers). Whatever kind of news it is, it’s going to rock him and bring forth change.

Fortune conjuncts the South Node in his first house of self, and that could be a good thing or a bad thing. He needs to be as objective and cool-headed as possible during this time. Otherwise, he’s risking a much bigger mistake on the account of a small one…

This is not a very good moment for any kinds of promises or structured ways of dealing with things. Now is the time to listen to your intuition and simply go with the flow in order to come out unscathed.

Black Moon And Demise – Or Is It Really…

The end of the month brings the second New Moon within this month. And this one packs a punch for the Scorpio man, as it takes place in his seventh house of partnership and love.

The Moon conjuncts the Sun, the Sun conjunct Uranus, and Uranus conjuncts the North Node – a chain reaction for sure. And in his first house of self, only South Node resides. So, his subjective feeling will be like him against the world. And his lover or love interest will have all the players in her court, so the exchange won’t be fair but it’ll be necessary, as Fate demands it.

Venus conjuncts Jupiter on the exact same degree in Pisces, and Neptune adds its fog and illusions to this contact. Mars is in there, too, but he’s not doing much aside from being frustrated and passively aggressive.

This means that his love life will turn upside down, and there’ll be many major changes in his life where his hobbies, fun, and love are concerned. He needs to let go of the past and his comfort zones in order to challenge himself and grow beyond his wildest dreams…

It’s a great moment to follow your intuition, to do as you feel the need to do, to smile, cry, laugh, and scream. This transit brings out the wildest sides of people, so it’s good to let it all out, just make sure to kiss and make up afterward.

Read next: 5 Questions To Ask A Scorpio Man

Your Scorpio man will feel a rollercoaster of emotions and events during this month. There’s a lot going on both at the beginning and at the end of the month, as we have two New Moons and one Full Moon that activates the partnership axis.

The Scorpio man’s libido will be fine and healthy, but his mind will be in shambles more than not during April. He just needs to let things happen, not fear them nor feel unnatural jealousy, and he should come out on top.

I know that it can feel impersonal just to read my general advice on my horoscopes. If you ever feel this way then take advantage of my VIP Consultations. I created them so that I could get more in touch with my followers, one to one. Move fast to book a spot though!

Wishing you a wonderful April full of love and light. I’m looking forward to seeing you here again next month!

One thought on “Scorpio Man Predictions For April 2022”