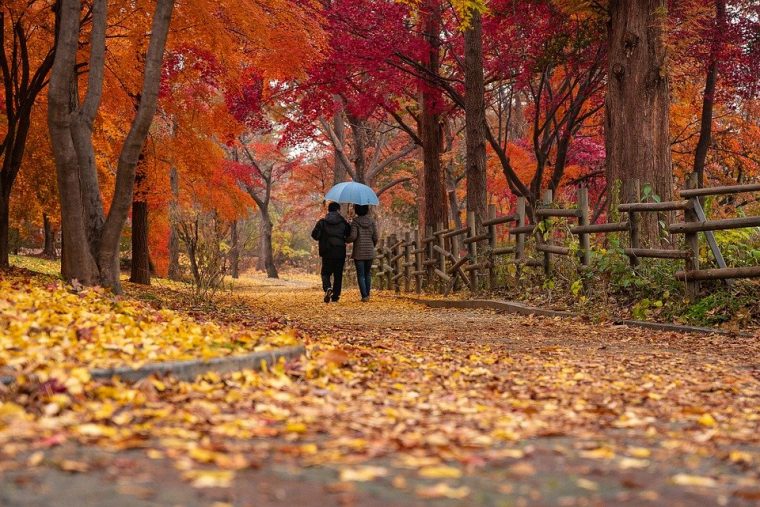 The season of the Witch is officially open, and the Scorpio man is back in business. This is his season above all else, and this is where he feels most at home. These autumn colors, pumpkin and cinnamon spices, warm sweaters, and hot cocoa is what’s it all about.

Add to those long talks deep into the night, extensive walks along the shore of a lake, and hand-holding, and you’ve got yourself a perfect Scorpio scenario, without a doubt!

But will it all be like that or is there something more… something sinister in the horoscope for this October for Scorpio man? We’ll find out!

The New Moon will see him in a pensive, a bit of a defensive mood. But he’ll still feel the need to share his inner world with his love interest or partner. The Scorpio man will do a lot of good work on himself during this New Moon.

Whereas the Full Moon will have him up and about, you’ll see. He’ll be on a roll, this is his season and his month for sure. How awesome is that?! A lot of opportunities for fun and interactive dates, too. I’d say this is a really fantastic month for the Scorpio man.

So, let’s dive deeper still, and find out what more this month holds in store for this Pluto dominant man, and how can you read him like a book!

The beginning of the month will activate his twelfth, first, fifth and third houses. This means that he will be a lot sleepier than usual, and that he will have to work on something he’s been neglecting as of late. He’ll have a glow-up, and he will definitely communicate more with his love interest or partner as the month progresses.

But his fears and inner work will be at the forefront of his mind at the start of October. He’ll be revisiting some past mistakes and conversations that he still feels wronged or guilty about. There’s going to be a lot of inner rage in him during this period, and it’s important that he deals with it well.

He’ll be encouraged to take better care of himself, and to treat his body with better care. There’s a good chance he’ll heed this advice and listen to the guidance of the stars as they will be working intensely via his intuition.

He’ll want to go out more often than you might be used to, so don’t be surprised if he suddenly asks you out on a date in a public place or where there’s a lot of people. His tenth house of public image is illuminated, so he’ll feel the need to show off both himself and his love interest or partner.

The New Moon will hit his twelfth house of sleep, locked fears, and suppressed trauma even harder as a big stellium will happen in Libra. The Scorpio man is no stranger to these dark kinds of topics, but it still might put him in a pretty foul mood.

He won’t feel very outgoing during this transit, but rather he’ll feel drawn to stay indoors and within the confines of closed spaces (or his home). He will definitely feel the need to share his inner world and deep thoughts with his loved ones. So, don’t be surprised if you get a sudden call in the middle of the night, or if he asks you to hang out at his place.

He’ll feel the need to be safe, secure, and comforted during this New Moon. Although it’s a New Moon, he’ll feel as if he’s finishing something, or finally letting go of some part of his past that has been weighing heavily on his mind and soul.

If you can be there for him in person – that’s great! If not, then make sure that he can still feel your presence. Chatting, video calling, or messaging are all great ways to stay in touch during this New Moon, and to be there for him to share when he is ready.

He’s often quite a closed person, with pent-up energies and emotions, so this will be a very rare chance to see him open up and be vulnerable in front of “witnesses.” If you really are into him and you care about him, then now will be the time to prove it. After all, the Scorpio man cares about proof and actual deeds, rather than pretty words and happy memories of when all goes well and smooth.

The Full Moon will activate his sixth house and his inner need for action (and speed). So, you might see him get a bit wild and crazy. He’ll want to go out and do things. They could be everyday tasks and chores he does all the time, but the way in which he does them will be different.

He’ll be pumped up and self-assured after all the insight he had gained during the New Moon, and depending on how things went with his lovely lady, he might even be positive and enthusiastic. One thing is for sure – he’ll be up and about, and no one will be able to stop him.

Mercury will have turned direct, and so he’ll be able to relay all of his newly found wisdom and gained insight to those who matter to him. He’ll also be in a bit of a combative or irritable mood due to the Full Moon and slight insomnia he’s been having, so don’t pay much attention if his energy comes off as sharp or rude.

His second house of body and finances will be blessed by a Venus transit, and the Scorpio man loves when money comes flowing in, so there’s a possibility that he’ll want to take you out on a fancy date. Don’t get surprised if he calls you out on an action date where you’ll do something unconventional and adrenaline-filled.

Read next: 6 Flirty Texts That Will Make A Scorpio Man Reply Immediately

The end of the month is a cool culmination for Scorpio man. The Sun, Mars, Fortuna, and Vesta will have all rolled into his first house and he’ll be full of energy, vitality, and good luck. He might even find himself receiving a large sum of money that he’ll undoubtably be very happy about.

If he experiences a glow-up during the beginning of the month, he’ll be a Christian Grey level of handsome and power when this transit hits! He’ll be open to all kinds of communication and energy exchange. He’ll want to share more of himself than he wanted before.

The end of the month puts Scorpio man in such a place, that he’ll want the world and he’ll get down and dirty in order to get what he wants. The time for him to shine has come, and the November forecast looks pretty good for him. Of course, in order to find that out, you’ll have to stay and see what November has in store for him.

If you feel like you need some more guidance with your Scorpio man, then why not take a look at my new VIP consultations. Let me help you get the love life you deserve using my knowledge in Relationship Astrology. I can answer questions and easy worries that you may have in your relationship. What are you waiting for?

Wishing you light and love on your journey.