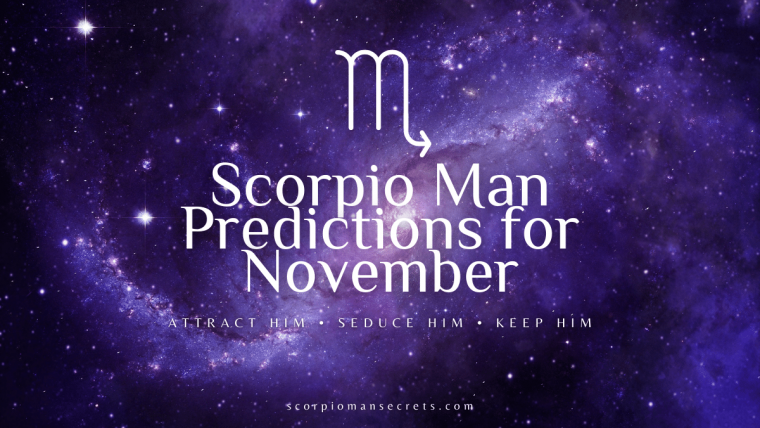 Hello, my darling readers. How are you? Are you ready for a month of real spookiness? November is at our doorstep, and it’s that time of the month, again – so, let us dive into the predictions for the Scorpio man and see what the planets bring us.

The first week of November brings us Daemon Targaryen’s edition of the Scorpio man – he protects, he attacks, but most importantly, he’s a prince in black. This is a great week to fall in love with the Scorpio man and delve into the hidden crevices of his soul. I’d say you should go out on dates, but it’s perhaps better if you stay tucked away ‘safely’ inside, away from prying eyes where you can get down and dirty, properly.

The second week brings forth a mighty Taurus Full Moon Eclipse, and the Scorpio man’s emotions are bound to boil over. This is a great week for him to get to know you better, and for you to be unapologetically yourself in front of him.

The third week of the month might complicate matters thanks to the tense square between Neptune Retrograde and Mars Retrograde, but his actions will speak louder than words, and his eyes won’t lie. Eyes are the windows to the soul, and if you want to peek into his – watch his eyes, see where they go, and try to see things from his perspective.

The fourth week offers a very nice opportunity for you to do something nice and pleasant for your Scorpio guy. Surprise him with your actions rather than with your words. But make sure it’s a pleasant and long-lasting surprise; the Scorpio man likes things (and relationships) that last.

The Scorpio man will not just have a glow-up during November, he’ll have an entire princess opening! Although one of his rulers is Retrograde (Mars, in Gemini, his eighth house), Mercury, the Sun, and Venus in his first house are making him focus on himself much more, and have fun.

Taking into account that (now) both Jupiter Retrograde and Neptune Retrograde are occupying his fifth house of fun, romance, and pleasure, making nice aspects with the three planets in his first house. And with Mars being in his eighth house, the Scorpio man’s libido will be at an all-time high, and he will mix his emotions with his carnal pleasures.

The first two weeks of November are every girl’s dream of being in a relationship with the Scorpio man; an abundance of sexy, powerful energies.

His mind, libido, and emotions will be very complex, and he will gladly dive into the depths of the exploration of your soul, without flinching or being scared of something. If you must think of an association – think Daemon Targaryen – he’s the perfect example of the Scorpio man during these first two weeks of November.

The second week of November kicks off with a mighty Full Moon Eclipse in Taurus, in the Scorpio man’s seventh house of love and long-term relationships. Don’t be surprised if your relationship experiences a sudden level-up. There are all these potent and powerful emotions brewing inside of him, and the Eclipse will just bring them over to the light side – plain for everyone, but mostly you, to see.

This is a very fertile and complex week, emotion and romance-wise, for the Scorpio man. This week offers a good opportunity to go (much) deeper with him and to discover almost all that there is to him. Be brave, and be persistent – the Scorpio man will appreciate that.

This is also a good time for unexpected and sudden changes. Although the Scorpio man, as a Fixed dominant, hates surprises and changes, he will be more prone to welcome them if they are positive in the emotional sense.

It will be an excellent transit for love for the Scorpio man, and a great time for him to freely open up and share his feelings with his lover. Even if you get into a fight, he won’t hold it against you, as he will feel grateful he got to know that side of you.

Remember, Scorpio as a sign doesn’t shy away from the unpleasant and ‘darker’ side of things and life, they welcome it and learn from it, rather than cower from it.

The third week marks a fantastic time for the two of you to get along and get to know each other much better, and on a deeper level, thanks to the mighty trine between Venus and Jupiter Retrograde.

Although you might find yourself at a loss for words or not as eloquent as he is, you will be able to relay the intensity of your emotions; it’s up to him to decode your inner meanings as he has an upper hand during this time when it comes to verbal and mental faculties.

He might act or feel a little bit withdrawn or shy, but that’s Neptune in a tense aspect to Mars Retrograde. It’s best to watch his actions and get a feel for his emotions through them, rather than his words.

The Scorpio man might feel a bit scared during this time. He might feel impotent to act in a way that is most truthful to his feelings, but his actions will have the ability to speak louder than his words. His eyes especially, pay close attention to the intensity of his stare, and where his eyes wander.

During the fourth week, the Scorpio man’s focus will switch to his finances, nutrition, and body. There’s a good opportunity for you to come through for him around the 23rd when the New Moon in Sagittarius takes place.

See to it that you pleasantly surprise him, and ‘return the favor’ so to speak… Remember how his actions spoke louder than his words? Well, now it’s your turn to make your actions speak louder than your words!

This doesn’t have to be monetary aid (but it could be), it can be something pleasantly surprising, humorous, and funny that will lighten his mood and bring a smile to his face. If you had an event planned, or a gift, now is a perfect time to present it to him.

Follow your gut, and let your intuition guide you when it comes to winning his trust and affection. Just know that this week offers plenty of good opportunities for you to get under his skin and stay there, in a positive context.

Well, there you have it, my darlings. The Scorpio man will have quite a fun month, and he will show you the meaning of intensity when it comes to emotions. During this month you will discover just how much (if at all) he is serious about your relationship.

And you will get a chance to read into your own emotions and feelings and see how you actually feel about him in the long run, for the Scorpio man doesn’t shoot for the Moon, he’s aiming for the stars when love is in question.

If you are still having doubts about the state of your Scorpio man or feel as though your relationship can use a little bit of a boost, then you might want to book a VIP consultation with me to solve your burning questions.

This way I can dig deep into your unique situation and you can come out on the other side feeling more connected than ever. I’ve reserved some spots for my readers, so if this feels like a call you need, book your consultation with me here.

Until next time, my lovely readers – I wish you all the luck in the Universe on your journey!